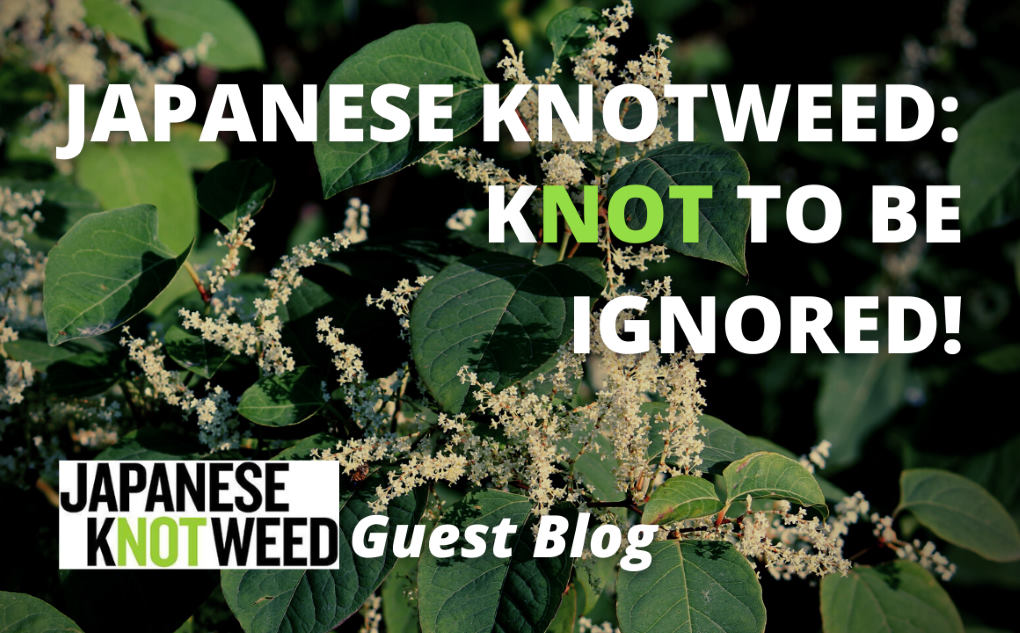 Japanese Knotweed: Knot to be ignored!

Japanese knotweed is an invasive and resilient herbaceous perennial. Its rhizomes (roots) can grow to a depth of 2m. Even after herbicide treatment has “eradicated” the aerial and surface growth, the deep underground rhizomes can remain in a viable state. It can re-emerge and re-grow on its own accord at any time and especially if the contaminated ground is disturbed. Japanese knotweed was sent to the UK in 1850 by a Bavarian doctor who worked for the Dutch army, Philipp Franz Balthasar von Siebold. Using its vigorous growth habit and its penchant to form dense screens as major selling points, knotweed was sold as an ornamental fodder plant with the ability to stabilise sand dunes

The rhizomes are the energy store of the plant, allowing it to hibernate over the winter and re-emerge in the spring. These are the most fertile part of the plant: a piece the size of your little fingernail, 0.5g, can propagate into a new plant. Japanese knotweed spreads via rhizome material and not by seed. We only have the female version of the plant in the UK, which means there are no viable seeds. Every infestation of Japanese knotweed in the UK comes from the first cutting that arrived in the UK in 1850 and they’re all genetically identical. As Japanese knotweed can only spread by means of vegetative matter, this means that it spreads via human disturbance. 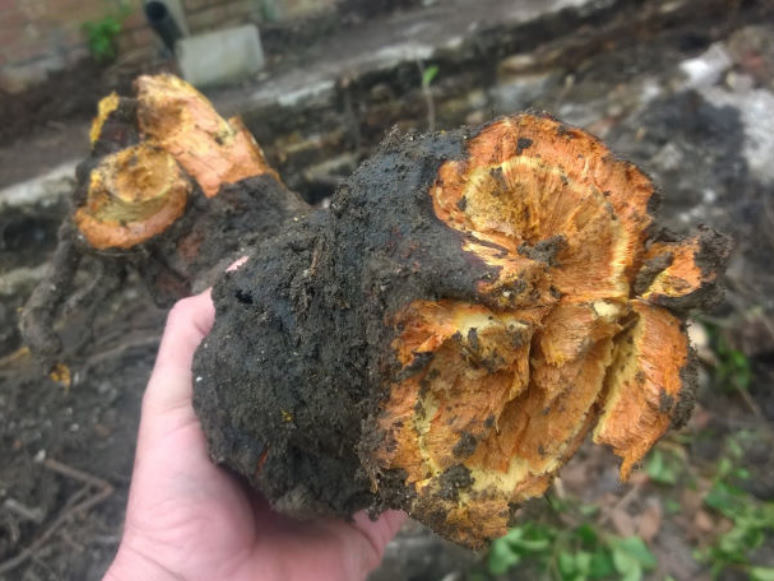 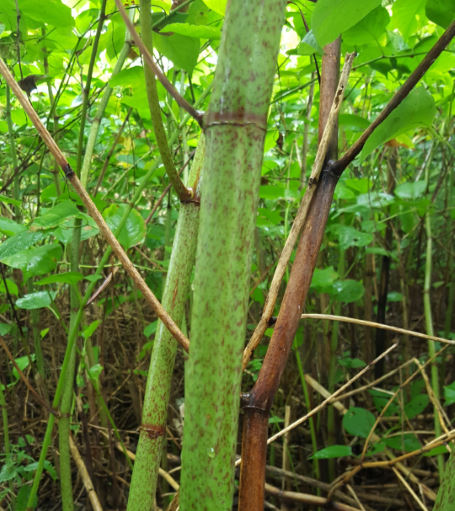 Spring growth begins around the end of April to early May. The season start largely depends on the climate. During this time, it grows around 10cm per day, up to a maximum of 3-3.5m. It’s a free-standing plant with canes, similar to bamboo. There is one stem branching off from each node of the parent stem in a zig-zag fashion. The stems are lime green with red/purple flecks. As the season progresses, the stems turn brown and become brittle over winter, when the plant is dormant.

The leaves are shovel shaped and NOT heart shaped, as many websites report. The top of the leaf has a flat edge, and it leads down to a point. They can grow up to around 20cm long (hand-sized).

They turn yellow in November, just like the trees and fall off. 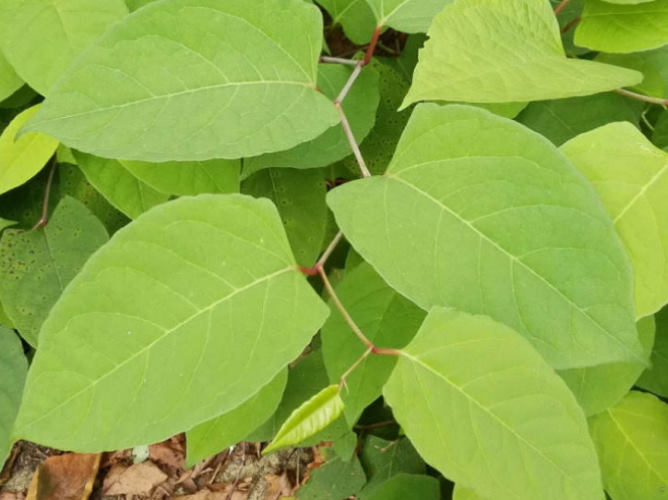 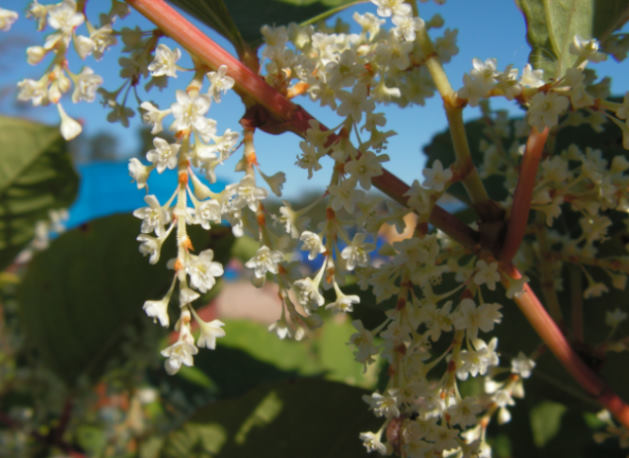 The flowers appear from August to mid-September. They’re creamy-white and small, forming a cluster, called a panicle.

Although there are no viable seeds in the UK, as we only have the female version of the plant, Japanese knotweed can hybridise with similar species, such as Giant knotweed and dwarf knotweed to create bohemian knotweeds.

This is a creeper, not a free-standing plant like knotweed. It’s commonly found in gardens and is quick growing, spreading quickly as it self-seeds.

It has small leaves with a deep obvious lobed back to the leaf, i.e. heart-shaped, with single trumpet-like white flowers. 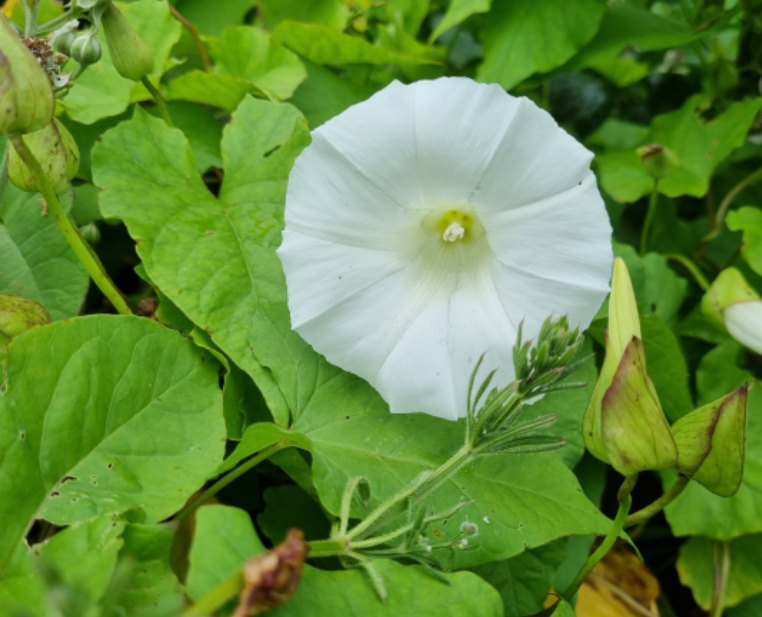 Commonly called “Mile a Minute”, this is a vining plant with woody, climbing stems that can reach to at least 10m in length.

The dark green leaves are heart-shaped, and the flowers are creamy white and almost cover the plant during summer. 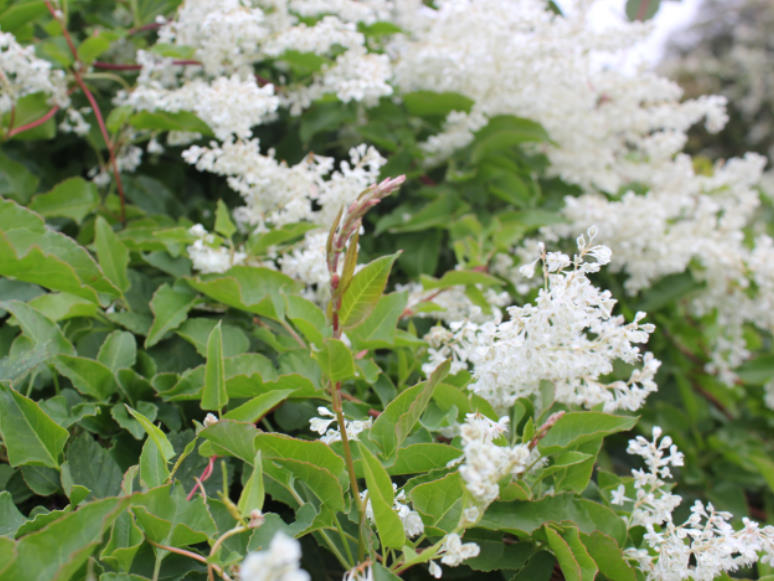 This is a deciduous shrub, growing to 2.5m with cane-like stems and soft, pointed leaves. It’s the plant’s tall free-standing habit that enable it to be confused with knotweed, however its leaves are slenderer with lobed back (not a flat back like knotweed) and the flowers purple (not white like knotweed). Himalayan honeysuckle also has a symmetrical growth habit whereas knotweed has an alternate growth pattern.

Houttuynia is a flowering plant native to southeast Asia but is commonly planted as an ornamental plant in the UK. It grows mostly in shady locations and is sometimes mistaken with Japanese knotweed due to the leaf shape, however Houttuynia leaves often have a lobed back (not flat like knotweed). The single four petal white flowers are also different to hanging cluster of white flowers knotweed produces. The key difference if scale. Houttuynia cordata is a shrub forming close to the ground whereas established knotweed is a tall free-standing plant. 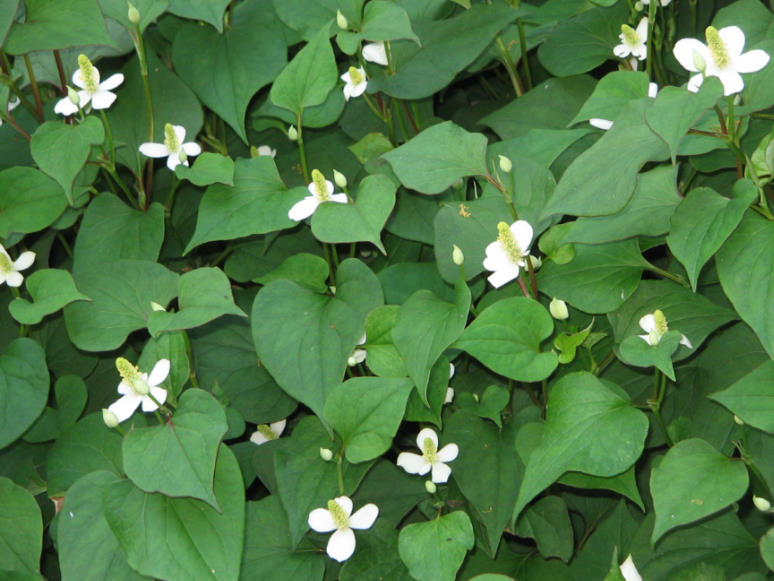 Knotweed and the Law

If you own or manage a property or land which is affected by Japanese knotweed, you are responsible for the control of the invasive weed. Failure to do so could lead to unwanted disputes, substantial fines, or even imprisonment. There is a reported lack of awareness of the legal responsibility of homeowners to prevent knotweed from spreading, with only 36% knowing they could be sued and just 18% aware they could face prosecution. Japanese knotweed is NOT to be ignored.

Presence of knotweed on neighbouring Network Rail land caused an actionable claim of Private Nuisance by Williams & Waistell in 2018. The Recorder at first instance found that both properties had been the subject of actual encroachment by knotweed, but neither had suffered any physical damage and therefore there was no actional nuisance. However, it was held that both properties had suffered a devaluation in their market value, because of the continuing presence of knotweed on Network Rails land which was interfering with their quiet enjoyment of their properties. On appeal, the Court of Appeal held that the initial Judgment had been wrong in principle to find that the mere presence of knotweed within 7 metres of the Claimants’ land was an actionable nuisance because it diminished the market value of their properties. However, the Court of Appeal did find that once encroachment has been established, then this would automatically amount to physical damage and an actionable nuisance. They, therefore, upheld the original damages award. Mr Williams was awarded a total of £16,420 whilst Mr Waistell was awarded £14,620

The Seller’s Property Information Form (TA6) is part of the Law Society’s National Conveyancing Protocol. The 4th Edition of the form was published in February 2020 and included changes to notes within the form and the explanatory notes which accompany the form. Changes were made to the Japanese knotweed, flood risk, radon and septic tanks sections. Changes to the knotweed section regarding the presence and risks of Japanese knotweed were released in response to the House of Commons Select Committee enquiry into on Japanese knotweed and its effects on the built environment. The Seller is asked the question ‘Is the property affected by Japanese knotweed?’, to which they must answer carefully from three options:

If the vendor lies and ticks “No” when they know that the property is affected and this can be subsequently proven by the buyer, the vendor can be sued for Misrepresentation.

Conways Chartered Surveyors failed to identify Japanese knotweed during a Level 3 Building Survey giving rise to a claim of Professional Negligence against them. Expert evidence at the trial identified that the knotweed should have been clearly visible during the survey. Being found negligent, Conways were ordered to pay £50,000 in damages, which included treatment and residual diminution in value of the property.

Japanese knotweed is listed within Section 14, Schedule 9, Part II of the Wildlife & Countryside Act 1981 as a non-native invasive weed.  This states ‘if any person plants or otherwise causes to grow in the wild any plant which is included in Part II of Schedule 9, he shall be guilty of an offence’. Offenders may face a £5000 fine and/or 6 months imprisonment, or 2 years and/or an unlimited fine on indictment The Environmental Protection Act 1990 sets out the appropriate methods of removing, transporting, and disposing of “controlled waste”, which includes Japanese knotweed contaminated materials

Do’s and Don’ts of Japanese Knotweed

If you suspect you’ve found knotweed on a property, don’t…

Ensure that you do…. 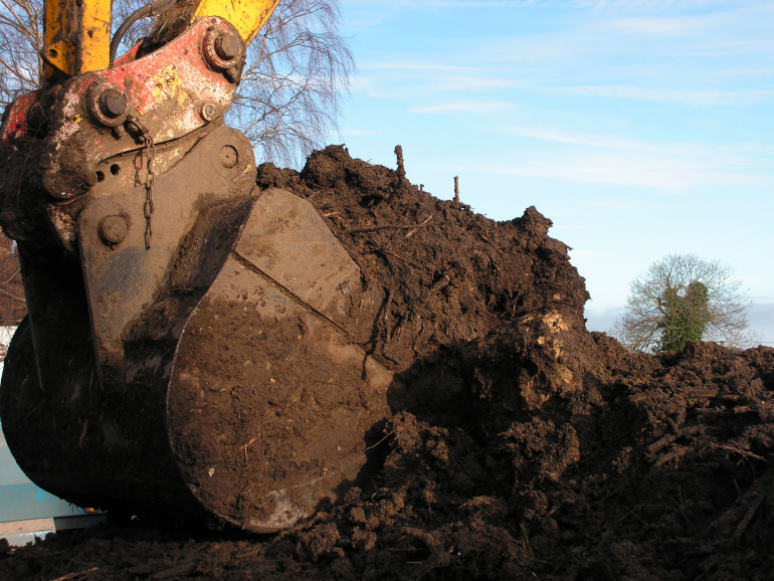 Root barrier is used to prevent the spread or to lock in ground containing knotweed plant material. 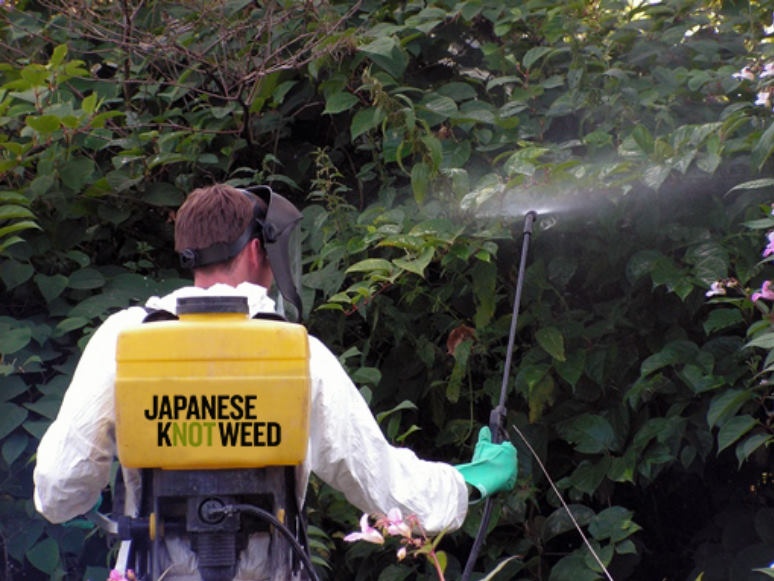 Chemical Treatment (herbicide) will not remove Japanese knotweed but will help control its growth. Japanese knotweed treatment will exhaust the plant’s energy stores. Over time, the treatment programme will prevent the plant producing aerial growth and additionally, prevent the rhizomes from growing further. If the knotweed area is likely to be disturbed, physical removal of the knotweed may be required instead. Treatment methods include stem injection, herbicide spray and leaf wiping. Our herbicide programmes are packaged within a 10-year Knotweed Management Plan (KMP), which comes with an Insurance Backed Guarantee.